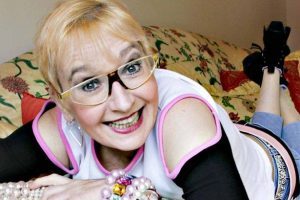 Susan Georgina “Su” Pollard, (born 7 November 1949 in Nottingham) is an English comedy actress and singer, most famous for her roles in the sitcoms Hi-de-Hi!, You Rang, M’Lord? and Oh, Doctor Beeching! As a singer, she scored a UK No. 2 hit with the song “Starting Together” in 1986. She is also well known for her unusual and flamboyant dress sense and her broad accent.
Early life
Pollard was born the eldest daughter of Don and Hilda Pollard. Her interest in acting began at the age of six when she played an angel in a school nativity play, She attended Berridge Road School, Hyson Green and Peveril Bilateral School, Robin’s Wood Road (now Nottingham Girls’ Academy). After leaving school at 16 she got a job at the Tennant Rubber Company in Carlton as a shorthand typist and began singing in working men’s clubs and charity shows. Following an apprenticeship at the Arts Theatre in Nottingham, Pollard appeared on Opportunity Knocks in 1974 singing “I Cain’t Say No” from Oklahoma! and came second to a singing Jack Russell. Pollard started appearing in many West End musicals including Godspell, Big Sin City, Grease and Oh, Mr Porter!
Career
In 1979, Pollard was chosen by the BBC to play Flo in a new sitcom called Two Up, Two Down with Paul Nicholas. However, this lasted only one series. The following year, Pollard landed the role of chalet maid Peggy Ollerenshaw in Hi-de-Hi! She continued in this role until the programme’s end in 1988, by which time she had become a household name.
In 1981 she became one of the presenters of children’s magazine show Get Set for Summer, in which she delivered wacky reports and bogus weather forecasts.
During the run of Hi-de-Hi!, Pollard had a singing career, and in 1986, she reached No. 2 in the UK Singles Chart with the song “Starting Together”, the theme song from the BBC Television ‘fly-on-the-wall’ documentary series The Marriage. It was her only Top 40 hit; her first single, “Come To Me (I Am Woman)”, had reached #71 in 1985 and her only charting album, Su, peaked at #86 in the UK Albums Chart in November 1986. In 1987, she toured the UK with The Su Pollard Show and co-hosted It’s a Royal Knockout.

Shortly after Hi-de-Hi! had ended, the writers David Croft and Jimmy Perry chose Pollard to star as Ivy Teasdale in their new sitcom You Rang, M’Lord?, which starred her Hi-de-Hi! co-stars Paul Shane and Jeffrey Holland. This period sitcom ran from 1988 to 1993. In 1988, she won the “Rear of the Year” award. In 1989 she hosted the short lived ITV game show Take The Plunge, but it was cancelled after one season. From 1993 until 1996, Pollard starred opposite Gordon Kaye in For Better or for Worse, a BBC Radio 2 sitcom about an engaged-to-be-married couple. In 1995 Pollard took over as face of the National Egg Awareness Campaign. From 1995 to 1997 she played Ethel Schumann in another David Croft sitcom Oh, Doctor Beeching! From 1989 to 1990, Pollard’s distinctive voice voiced the lead character in the BBC children’s television series Penny Crayon.
More recently, Su Pollard made a guest appearance in Gimme Gimme Gimme in 2001 and voiced Noisy in Little Robots. In 2001, she presented Songs of Praise three times and she has made four appearances on Just a Minute. She also regularly appears in pantomimes and other stage shows including Annie and The Pirates of Penzance. In 2008, Pollard starred in the musical Shout! alongside Claire Sweeney. From April 2009, Pollard appeared in the London transfer of Shout! at the Arts Theatre. In December 2010, Pollard had a guest role in the Christmas special of ITV’s hit show Benidorm, playing herself. In December 2011, Pollard appeared as a guest on BBC One’s Strictly Come Dancing. In the 2012 movie Run For Your Wife she had a cameo role as the newsagent.